On Saturday, June 5, 2010, I celebrated life by chasing a barefoot man and a 19-year-old girl on the trails of a Philadelphia park. Burning thighs, sweating eyebrows, unquenched thirst and twisting ankles reminded me that I was alive.

As I lined up at 9 a.m. at the start of the Wissahickon Trail Classic 10k race, along with about 450 participants, my mind wandered back to a year ago. On June 5, 2009, I collapsed overnight from a bacteria called C-Difficile that can cause deadly colon infections, with a blood pressure qualified as “near-death” level by the emergency-room doctors. They pumped me with fluids for about eight hours, and by the morning I was well enough to graduate to a hospital bed upstairs.
Two weeks ago, as the anniversary of that night approached, I decided to run a race. I picked the trail race because I wanted to be close to nature, in the woods. I hate to race unprepared — I had run once on trails this year, in early April, and I hadn’t trained for the distance — but I made an exception: the point was to run a race on June 5 and make it the first of many June 5 races.
Even though it was just a 10k, I suffered from anxiety-induced ailments that usually affect me only before big races such as marathons. On Friday evening, I started feeling pain on the sole of my right foot. Overnight, I dreamed that I was lining up for an urban race, near the front. Everything was going according to plan until I discovered I had forgotten my running shoes: I was barefoot. By the time I’d found my shoes and come back to the starting line, the race was already under way.
Saturday morning, I woke up at about 6 a.m. and walked to the bathroom with a limp: the foot pain was worse. I ignored it, but I made sure to put shoes on before leaving the house.

Philadelphia has the largest city-owned park system in the world with 9,200 acres (3,723 hectares) and the Wissahickon Valley Park, with 1,400 acres stretching for 7 miles (11.2 km), made me forget about the city — and the mysterious foot pain — the minute I stepped in.

(Posing before the start of the 2010 Wissahickon Trail Classic 10K. With shoes.)

The temperature was already hot at the start — about 80 degrees Fahrenheit, or 27 degrees Celsius — and it was very humid. My friend Bill, of the Delco Road Runners Club, who was running the race as well, told me that the first half-mile would be flat, on the main path called Forbidden Drive, and that I should make my move there, because afterwards the course would veer off to a single-track, hilly trail.

Checking on the competition in my age group, I spotted a few women in their 30s who looked strong. We started fast, but I managed to pass at least one female runner on the flat portion, before moving to the trail. My thighs started to burn immediately and I cursed myself for having gone to bed late and drinking beers the night before while watching a hockey game on television.

Non-runners often ask me what I think of when I run. To help bring positive thoughts and cope with the burning thighs on that first hill, I reminded myself that beer is source of carbohydrates, which are good for endurance. I pushed away thoughts that my late night was slowing me down. I mentally pictured my body processing the beer and transforming it into energy to fuel my speed. I wish I could say that I was thinking about stoicism and Arthur Schopenhauer’s philosophy of the will. I wasn’t.

I passed several runners, including a young woman with olive skin, black hair in a pony tail and golden earrings. Then I got stuck behind a runner on the way down. He was going too fast for me to pass him and he was going too slow for me to stay behind. While I was pondering the risks and rewards of trying to make a move around him without tripping and breaking my legs, several runners passed both of us. The third one was the pony-tailed girl, who flew by me on the way down. There were no markings so I don’t know how far I was in the race, but I estimated it couldn’t be much farther than 1 or 2 kms (1.2 miles). I thought I’d catch up with her at the next climb, provided my thighs stopped burning. She was soon out of sight.
I finally passed the runner ahead of me and moved on to the next. I would normally not feel thirsty on a 10K, but that day I was looking forward to the first water station at mile 2: even my eyebrows were perspiring. After the water station, a group of two or three runners and I fell into a pattern: I would slowly pass them on the way up — several of them walked in the steeper parts, something to which I could never bring myself even as part of an overall race strategy — and they would smoke me on the way down.
I twisted my right ankle at least four times and the left one twice on a steep downhill portion — then I stopped counting. For a while, I was behind a runner wearing Vibram FiveFingers. I was looking at the back of his shoeless feet and wondering how it was possible to run that way on such a rugged terrain. Recalling my anxiety dream, I resolved to beat him, and did.
The downside of a trail race is that you’re surrounded with natural beauty but you’re only looking at the feet of the runner ahead of you. If you’re first, you need to look for the markers. I missed a sharp turn, and two runners took the opportunity to pass me.

The final portion of the race included a steep hill: I felt exhausted. Other runners were walking: they were more exhausted than I. Only then did I start to get into the race mentally. I was finally warmed up. My mind was taking over my body and wandered back to June 5, 2009, to find the fortitude for a final push.
The trail took a few hairpin turns and I caught a glimpse of the young runner with the ponytail at the top of a hill. I was catching up. I also saw another female runner behind me. Was she catching up with me? I accelerated and decided not to look back.

I finished sixth female overall, in 50:02, a whopping 5:29 minutes behind the winner, a 27-year-old runner who left us in the dust, and 49 seconds behind the pony-tailed girl, aged 19. I couldn’t decide whether to be vexed to have been beaten by a teenager or proud to keep up with such a youngster. “No excuse,” said Chris, a fellow Delco RRC runner.
My reward for coming second in my age group was to pick a flower or a tree from a dozen plants brought by the organizers for the winners. Based on the leaves, my pick looks a mountain laurel, according to my husband. The flower is, fittingly, the official state flower of Pennsylvania, my state of adoption.
I can’t wait to see it bloom. 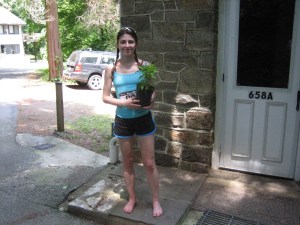 (Showing off my award after the race. Sans shoes.)