The Novice, the Veteran and the Jet-Lagged

The Nice Marathon on Sunday, Nov. 4, will be a women-in-the-family affair. Claire, my younger sister, is running her first marathon. For Simone, my mother, it will be the 22nd and last. I’m flying across the Atlantic Ocean to be Claire’s pacer.

Along the French Riviera course, which starts on Nice’s seafront and finishes in Cannes, our biggest supporter will be a veteran runner: my father, Alain. He was sidelined by a partial knee replacement this year, ending a running career that included 23 marathons.

The cheering crew also will include my sister’s husband Flo, and their two children, Noélie, 13, and Noam, 11.

Running marathons is a Daurat family tradition. Alain pioneered the distance at the 1994 Paris Marathon in his mid-40s, and Simone followed in 1995. That was long before the commercial boom in the sport that has swept the U.S. and Europe in the past decade. There were no chips to calculate your exact time back then, and no need to register months ahead. You’d show up on race day, get in line and start at the gun. Adults willingly running 42.2 km (26.2 miles) for no particular reason were still viewed as borderline lunatics.

I made my debut with them in 2002, also in Paris. I had no idea what to expect and ran with Simone for most of the race. She paced me with her even stride and taught me consistency. Her steady presence at my side, no words needed, is the most powerful memory of my first marathon.

“I was overjoyed to see you taking off in the last kilometers,’’ Simone said. “I already sensed at the time that was passing the torch to you.’’

By 2015, I had run 11 marathons, including four under 3 hours. Simone and Alain, in their late 60s, decided to retire the distance and finish with the most prestigious race: the Boston Marathon. Things didn’t go as planned. I got injured and was unable to train for months. On race day, I decided to stay with the slowest of the two. Surprisingly, it was Alain, who had what every runner experiences at least once: a bad day. Drenched from the rain on that miserably cold April day, we crossed the finish line together in a deeply emotional father-daughter moment. Today, Alain sees that moment as a baton handover. 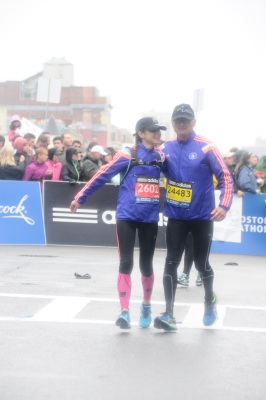 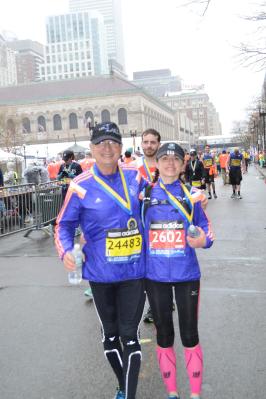 Big smile
Now it’s Claire’s turn to tackle the distance. It’s almost a wonder that it took so long for someone born a Daurat.

“Running is an institution in the family. It binds us. We like to talk sports when we’re together,’’ she said. “I was the only one who hadn’t run a marathon, so I’m doing it at 42!’’

For a novice, Claire has already displayed resilience in the face of adversity. After a hilly 18 km training run in the August heat, she felt pain on the side of her left knee. The diagnosis: tendinitis. That meant 10 days without running. When she started again, the pain was still there. The race was fewer than 10 weeks away.

“I lost hope,’’ Claire said. “I was convinced I wouldn’t run the marathon.’’

With help from physical therapy and acupuncture, she started feeling better. After what she described as “emotional roller-coasters,’’ she slowly ramped up her mileage and started believe again.

Her goal is to finish; she has no time in mind. And she has one regret: “I would have loved for our dad to run with us.’’

Her support crew is ready.

As the big sister, I revel in my duty as coach and morale booster. Focusing on her has liberated me from any pressure to perform. I might be sleep-deprived after the trip from the U.S., but I’ll be anxiety-free and eager to carry my mission.

Husband Flo, who biked alongside Claire on her long runs, said it was complicated to manage the stress during the weeks of uncertainty. In the end, it all went well, he said.

“I want her to enjoy herself more than anything,” Flo said.

The kids are psyched. “I’m going to feel so happy when I see Mom, Grandma and Auntie Cécile on the finish line,’’ Noélie said. “I’ll feel proud.’’

Noam’s take on his mother’s first marathon: “It’s great because she’s so strong!’’ “Before the start I’ll tell her: Don’t give up! You can do it.’’

Asked by their running-fanatic aunt whether they’ll run a marathon one day, both demurred. “I don’t think so. For the moment, it seems impossible to me,’’ Noélie said. Noam agreed: “42 kilometers, it’s huge!’’

I felt that way too when I was their age.

That’s fine because the older generation isn’t done. Simone is about run her second “last marathon.’’ She says her training went well “for her age,’’ and I can testify. When my parents visited me in the U.S., she logged several runs of two hours or more. As usual, she suffers from intense pre-race jitters. “But I try to hide it from Claire!’’ she said.

“My dream would be that the three of us finish together, holding hands,’’ Simone said. “But that’s just a dream.’’