On Saturday, Jan. 2, at about 9:30 a.m., the temperature in Fair Hill, Maryland, was in the 20s Fahrenheit with a “real-feel” temperature in the single digits (about -15 degrees Celsius). The wind was blasting so hard in my face that I could barely breathe. My hands were frozen and numb inside my gloves. My eyes were teary and my nose was running. I’d just caught the trail bug. 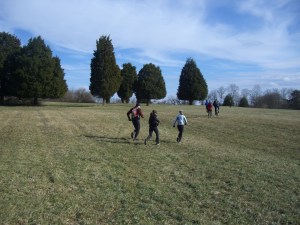 (Scenic views of the trail. On the far right, Bill, in blue, Janet, in red, Whitney, on the bike. )

It had been incubating for a long time. Last summer, I discovered the Brandywine Creek State Park’s trails with my friends Rita and Ray, who had just started running. As far back as I can remember in my childhood in the French Alps, we would go hiking on trails in the summer. It would never have occurred to us to run up the mountains, though. Once, as we were slowly making our way up the slope of Le Granier — a nearby 800-meter (2,600 feet), 2-hour hike that includes an easy but steep rock-climbing passage– we were passed by runners with race numbers. We couldn’t believe it. It’s crazy to run up the mountain, we thought: this coming from a family in which both parents in their 60s run marathons and cycle up Alpine passes. 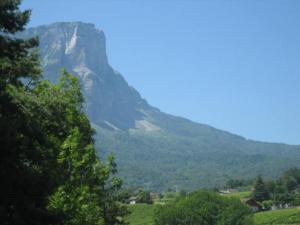 (Le Granier, my hometown mountain in France: the trail is on the back, not off the cliff…)

I love trails. I love running. I don’t hate suffering. It’s surprising it took me so long to pick up trail running.
The Phunt trail run in Fair Hill was a 50-km (31-mile) race with cut-offs for about 20 km and a marathon. In the world of the organizers, a marathon falls into the shortcut category. I had decided to run the 20k, given my lack of training, and make peace with the fact that I’d be a whimp among the braver 50kers.
“This run is meant for experienced trail runners, but anyone with marathon experience who wants to try an ultra and promises not to whine if they get tired and dirty is welcome,” the organizers said on the race’s Web site.
Shortly before 9 a.m., the wind was blasting hard in the white tent near the start line. The runners huddled together for the final instructions, shuffling their feet to keep warm like a group of penguins. A few of them were in shorts, their legs red with cold.

For my maiden trail race, I was accompanied by four runners who together have run about 60 trail races; Bill (about 35), Janet (about 10), Bob (8) and Mike (half a dozen). The first few minutes were painfully cold and as we ran through meadows, there was no protection from the wind. My feet, trained to run on fairly even pavements and paths, were struggling to find a balance on the bumps of frozen mud. I counted at least 20 times when my left ankle rolled, threatening to twist, over the course of just several minutes. Then I stopped counting.
“You are spoiled for your first trail run!,” Bill said. He meant this trail was nice and easy compared with the real thing, in places like Reading, Pennsylvania, where it gets really muddy and dirty.
The views from the meadows were scenic. The forest was at times fairylike, especially when we entered a canopy of trees crossed by the sun’s beams of light.

(The canopy of trees. As Janet said, the pictures don’t do it justice.)

Bill and I left Janet — and her husband Whitney, a brave support crew member on his mountain bike — at the 20 km cut-off. Looking at her back, I remember thinking she was going strong. She was, and finished as the first female of the 50 km in 5h14: her first win, without even trying. Her only casualty was a bruised toe and she started running again three days after the race. It’s extremely impressive, and, for those who get sore muscles and other injuries on distances a fraction of what she did, a bit unfair, quite frankly.

(Janet on her way to her first win, going strong uphill.)

After confessing to each other that we were prone to getting lost, Bill and I stayed true to our words and got lost. We fumbled with maps for a while and made our way to the finish after 15.25 miles (about 25 km). Bob, who started trail running 2 1/2 years ago, followed shortly after. Mike was also among the brave ones who completed the 50 km course.
“When I’m trail running I like to take it easier and really enjoy it,” Mike said in an e-mail a few days later. “I think it’s a product of getting older.”
That’s it. I’m getting older and more exposed to bugs. I can’t wait to enjoy my next trail run. 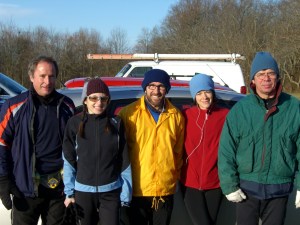 (Bob, me, Bill, Janet, Mike and, in the background, Mike’s famous van, at the start.) 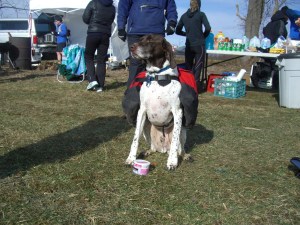 (A canine athlete, about to get a yummy, post-run snack after finishing the 20 km course. Forgetting all my journalistic instincts, I forgot to ask his name. I blame the cold..)