This weekend, I was a beginner again: I ran for the time since May 31, after being floored by a bacteria called C-Difficile that landed me in hospital with sheer dehydration and an infected colon. In a few days, the illness sucked up my strength, ate away my muscles and annihilated years of training. On my IPod during the run, the slow rhythms of Aimee Mann’s “Lost in Space” album replaced the faster paces of Radiohead, Led Zeppelin and Neutral Milk Hotel that used to motivate me in long runs.

I ran only when I was ready. I trained for it in the same way I might have trained for a race, by slowly building up a base of strength, mental and physical.

The training started June 7, on my second morning at the hospital: I tied my hair into two pigtails, my trademark hairdo for races and bike rides. I had sweated and suffered so many times in pigtails that it was natural I should wear them at the hospital. The following day, one of my doctors pronounced three sweet words: “You should walk” to ease water retention due to the liters of fluids the IV was pouring into me days and nights. The retention had caused my legs and belly to swell to twice their regular size. I started daily walks, pushing my ballooned body and the IV machine. 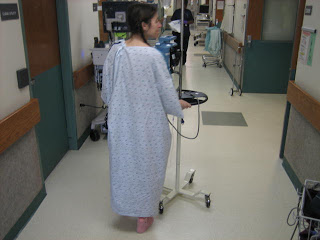 On my first day back home, I walked around the house for about half an hour. Over the following days, I started to walk up and down our driveway; twice, then three times, then four times at a time. After about a week, I tried the stationary bike to see how much strength I had left (not much).

Then I pushed to a nearby cemetery about 300 yards (300 meters) farther down. The first time I walked down to the cemetery and back, it took me about 20 minutes. Slowly, I saw that time shrink. I was also well enough to add mild core exercises and abs, and stretching. After relapsing on July 4, I cut back on exercise. As soon as the new medicine kicked in, I started walking up and down the driveway again. After I regained some muscles, I was able to slowly run up the hill, for 5, 10, 20 and now 30 seconds at a time. 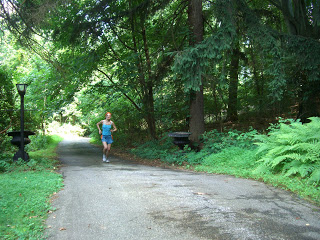 All the time, I brushed away the thought that just few months ago, I was able to run 20 miles without difficulty. I listened to podcasts of Laurent Ruquier, who hosts a humorous show on French radio. The crass jokes made me laugh aloud.

Nothing completely prepared me for the first run. My body — thinner, less muscular — felt awkward, unnatural: I have to re-learn how to move my legs and my arms. The following day, I felt sore muscles in the calves and lower back. 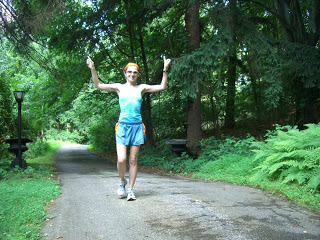