The sky is partly cloudy with few showers forecast in the afternoon. The temperature is about 70 degrees Fahrenheit (21 degrees Celsius). Today is Sunday, Sept. 28, 2008, the second day of a 15-day vacation in Cape Cod. It’s my second run. Yesterday, after the eight-hour drive from home, I ran about 6.5 miles (10.5 km) in the fog. That run was a greeting run to get myself acquainted again with the roads where, a year ago, I trained for the New York City Marathon. The first run I wanted to log in here was on Brick Hill Road, on the hills where I did speed-work and accelerations a year earlier to gain leg strength. The fog and light rain add beauty to this beautiful place. Cape Cod was welcoming me back in a cotton embrace. 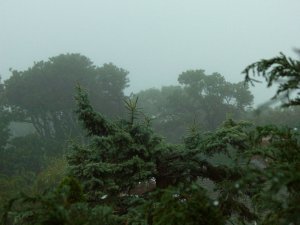 This year, I decided not to run the New York City Marathon, taking a break after completing Austin, New York and Boston within a year. The real reason is I didn’t want to train during my honeymoon. In fact, I am probably in as good a shape as last year, if not better, after running long distances all summer on the hills and in the heat around the house in Pennsylvania.

Today, the sun is back, unexpectedly, because Hurricane Kyle — passing 100 miles away from the coast — has spared us. The 45-mph (72 km/h) winds forecast yesterday didn’t materialize. I am doing something I have never done before: go for a run with scheduled stops, to take pictures. I never stop when I run except to adjust my iPod or for a traffic light. Even that I resent. I never walk either. It breaks the rhythm of my pace. Today is different: I scheduled two stops and planned to take a picture any time I think it’s worth a shot. When I start, my legs and my upper back — an old strain in the shoulder that came back two weeks ago — hurt. The colors of the leaves are changing and it’s like a festival: nature is so luxurious after the rain stops that it’s almost indecent. The reds aren’t red: they’re sanguine, screaming at me. After a few minutes, I stop to take pictures of the trees. When I start again, the legs and the back hurt even more. 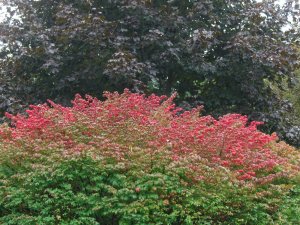 I rapidly find my cruising pace, though, and head to my first stop: Nauset Beach. You meet a lot of people with white hair walking in Cape Cod. During my 12.2 mile (20 km) run today, I will see at least half a dozen walkers, some power-walking at a brisk pace — mainly women, — some with canes. A woman with a fast pace tells me she used to run, but she doesn’t anymore “because of my hip.” 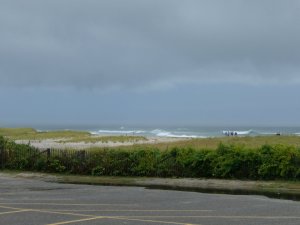 I like to think I’ll be like them when I’m older. My parents, at 60, still run marathons, so I secretly hope I won’t be a walker until, say, my 80s. Cape Cod is the most eastern piece of land in the U.S. At Nauset Beach, I am facing Europe, and France, my homeland. I was hoping for big, white surf in the wake of Kyle, but there’s nothing dramatic.

Off to the second stop. I take Brick Hill again to the point at Weeset, where I take pictures of Nauset Beach across the harbor. By now, I have run about 4.5 miles (7.2 km). I am sweating and I wonder if I can finish my run without water in this sun. I hadn’t expected it would that hot and didn’t bring anything to drink. I decide to take an easy pace to spare myself. Soon, as if understanding my concern, the sky turns a lot darker. The rain is on its way. It starts to drizzle when I pass the cemetery where my husband’s grandparents are buried. I greet them in French.

The run feels really good, so I decide to make a third stop, adding 3 miles (4.8 km), to check the end of Barley Neck Road, because I can’t remember if I went last year. It’s worth it. A beautiful cove. I take more pictures of leaves and I head back home, passing three more walkers. It’s my first tourist run. The first of many. 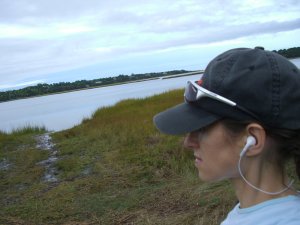