“I signed up this weekend for a marathon on September 18th 10K miles away,” my friend and colleague Craig told me in an e-mail on Aug. 8. “Can you guess where?”
Craig travelled 10,000 miles from New York to Sydney to run a 26.2-mile race after a 24-hour trip and training truncated by a hurricane to two weeks. With a 16-hour jet lag and heat that rose as high as 83 degrees Fahrenheit (28 degrees Celsius), Craig, who describes himself as “not a warm-weather runner,” ran a slower-than-usual 4h55m: he walked during the final 6 miles to avoid becoming a casualty of the heat and not finishing.
“I was very happy when Sydney was done since it was not pleasant from the start,” says Craig, who stayed in Sydney for four days.

On paper, the trip’s return on investment is negative in terms of pain, time spent, financial cost and perhaps mental sanity. Yet for Craig, who has a “grand plan” of running a marathon on every continent, it was important to cross Oceania off the list. His determination gets my respect, regardless of whether you deem the last-minute Sydney decision a folly.

(Craig at the Sydney Marathon 2011, where organizers set up tables with large dispensers of suntan lotion and handed out hats to beat the heat.)

Craig, who ran his ninth New York City Marathon seven weeks after Sydney, says he’s known as “the guy who runs in every marathon.” He has inspired a colleague in New York who had stopped exercising to become a triathlete and has inspired many others.

His vow to run a marathon on every continent came after seeing Ranulph Fiennes, a British adventurer and endurance runner, at the finish of the 2003 New York City Marathon. Fiennes, who was 59 at the time, was ending his challenge of seven marathons in seven days on seven continents, four months after undergoing a double heart bypass operation. The two finished the race within a minute of each other and Craig commented on Fiennes’ Union Jack shorts, realizing only later to whom he was talking.
“I could not believe he was doing this,” Craig says. “I have a lot of respect for him.”

Craig’s list of marathons now spans six continents, in cities including Chicago, London, Paris, Tokyo and Austin, Texas; one amusement park: the “Goofy Challenge” at Disney World in Orlando, Florida, a world of its own; and the end of the world — the Fin del Mundo in Ushuaia, Argentina. His best memory was the Antartica Marathon in 2005, “primarily because I was locked up with 100 crazy runners for 10 days,” he says.
“Anytime that they offered something to do, there were 100 folks ready to do anything — camping, swimming, kayaking, climb up a mountain, etc.,” Craig says, adding he was intimidated about being among top runners.
Hanging out with the elite may have helped him push his limits. Antartica was the only marathon where he kept feeling strong until the end, he says. 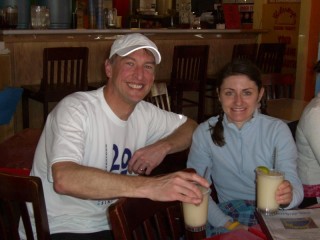 (Frozen margaritas are the best post-marathon recovery drinks. In Austin 2007, where we both had personal records. His still stands.)

Craig’s rationale for booking a trip to Sydney just a month ahead from the race is surprisingly rational. In August, Craig had run only two marathons since breaking his ankle in early 2009 by falling on ice, an injury that left him unsure about how long he could continue running and put his grand plan on hold. He participated in the New York Marathon ten months after the injury, a race he describes for obvious reasons as a “bad experience.” Running New York 2010, a year after getting corrective surgery, felt like a turning point, he says, giving him some confidence that he’d be able to continue running . For 2011, he turned his sights to Australia, where he considered Sydney and Gold Coast in July.
“The timing worked out this year for doing Sydney, so I went for it,” Craig says.
Two weeks after he booked the flight, Hurricane Irene struck, flooding his basement and leaving him without power for six days.
“That was basically the end of my training for the marathon,” he says.
Craig, who started running in junior high school, ran his fastest marathon in Austin in 2007, four years after his first try at the distance at age 45.
“Running was always something I enjoyed but never really pushed myself at it until recently,” he says.

Craig won’t stop after he’s done with his grand plan. He just turned 50, entering a new age category, and hopes to improve his time enough to qualify for the Boston Marathon.
In the meantime, for the last continent on the list, Africa, Craig is considering the Kilimanjaro Marathon in Tanzania or South Africa. That’s about 8,000 miles away from home.

How far would you, or have you gone, to run a marathon? Runners, you can let me know in the comments section.