A good headline news writer knows how to get a reader’s attention. Now that I have yours, let me tell you about my first “ultra,” the nickname for any race longer than a marathon. (More on that bikini later.)

The setting of my first 50-kilometer (31-mile) race was the Blues Cruise trail race organized by the Pagoda Pacers club in the region around Blue Marsh Lake near Reading, Pennsylvania. The directors alerted us mid-September that the trail, especially its bridges, had been damaged during storms and would be repaired by park rangers and a group of volunteers. When I went to bed on Oct. 1, the day before the race, it was raining. Every time I woke up during the night, it was raining. When the alarm clock went on at 5:30 a.m., it was raining. My first instinct was to stay in bed. My friend Bill of the Delco Road Runners Club was picking me up, so I finally dragged myself out of bed. Mike would join us at the start, while Janet decided to skip the race because of knee pain (She still showed up at 6 a.m. at the car pool appointment, making me feel sheepish about contemplating staying in bed on a rainy Sunday morning).

It was about 45 degrees Fahrenheit (8 degrees Celsius) and misty at the start. My choice of gear — a tank top and shorts — made me feel underdressed. I decided to wear arm sleeves, and so did Bill. Then I agonized about whether I should wear gloves, carry water and change my shorts. The worst part of a race can be the waiting before the start, when so many choices are still available — including staying in the warm car to nap while Bill was running. 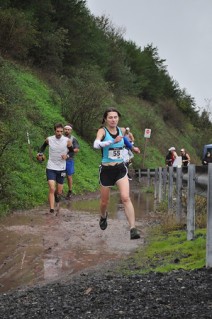 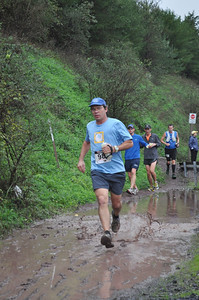 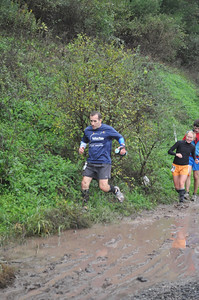 Once we started, there was no other choice but running for 50 kilometers around the lake. The trail was very muddy and the bridges as slippery as if covered in soap. Around mile 10, we reached the bottom of the so-called “Ski-slope Hill” (“uphill,” Bill confirmed with a fellow runner): about 300 feet (91 meters) of elevation over less than half a mile (800 meters). Most runners walked. I jogged very slowly, partly because I didn’t want to interrupt the running rhythm, partly because I train on steep hills and mostly because I wouldn’t want to be seen walking; over my dead body. It was pointless as everybody I passed uphill passed me back downhill: I’m a poor downhill runner, especially on wet grounds. My choice was going slow or falling (hopefully not both). I chose the former.

The half-marathon (13.1 miles) came and went as fast as a sprint. Long-distance running distorts the notion of distance. When I run 7 miles, I find 4 miles pretty long. But on the trails Sunday, I knew the real deal would start mile 20. I ran alone for most of the second part of the race, i.e. for more than two hours, but I didn’t feel lonely or bored. I concentrated on my steps, on choosing the least muddy part of the trail and avoiding to trip on tree roots. The temperature was cool and ideal for running. At the 24-mile water station, I joked with the volunteers, who do an amazing job standing for hours to support us along the trail. I took both water and Gatorade, but what I really wanted was the beer of one of the volunteers. 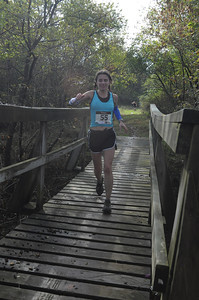 (On the wobbly bridge. Photo by Jim Blandford) 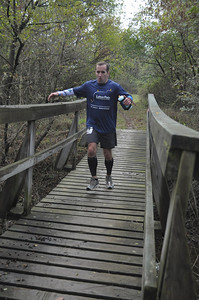 (The bridge was wobbly and slippery: no kidding! Photo by Jim Blandford)

I felt exhilaration for about 2 miles after that next-to-last water station. In a regular road marathon, I would be struggling mentally and physically at this stage of the race, with a couple of miles to go. But here I was cheerfully hopping around puddles of muddy water — making plans for the rest of the day — high in spirits and in the expectation that I would finish my first ultra soon. I should have known better: After the high comes the mental abyss. At mile 25, “soon” was still 6 miles away, or more than 50 minutes.

After mile 27, every mile felt like a marathon: long, painful and slow. I could see the yellow hat of the runner ahead of me through the trees and that at least gave me a focus. I didn’t feel any acute pain but a more general sense of soreness, tiredness and eagerness to get done with the race. I tried to motivate myself by comparing what I had left with easy runs I knew (the 5.5-mile club run, the 3-mile jog with the dog around our neighborhood and the 1.2 mile to go from my parents’ house to my sister’s and back in the French Alps). The last few miles included some heartbreaking hills that slowed me down. It might be the proof that my struggle was mostly mental: There was nothing fundamentally wrong with my body (at least for someone who just ran more than a marathon), but my head had had enough.
“I firmly believe that running is 90 percent mental. Especially ultras,” Janet wrote to me afterwards. She knows: In the past three months, Janet has run a 100k and a 60-miler, finishing first female both times. She was the only female to complete the 100k.

I finished the Blues Cruise 50K in 4 hours 26 minutes, second female and sixth overall, followed by Bill and by Mike, who ran in pain for more than two-thirds of the race. Upon arrival, Bill told me he thought 50 kilometers was probably his maximum running distance. This coming from a runner who participated in a race called Labor Pain last month and clocked 50 miles (80 kilometers) in 10h48. The Labor Pain, a 12-hour race, included some walking, so Bill doesn’t count it. Janet, Mike and Bill are my ultra heroes. 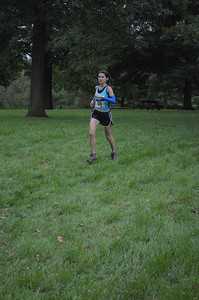 (On my way to the finish line: just a few meters to go! Photo by Jim Blandford)

What about the bathing suit? Here is what a writer shouldn’t do: wait for the last paragraph, known as kicker, to explain his headline. Around mile 12, I heard commotion and came upon a river — a river of cold water. There was no bridge, just a rope above that was too high for me to reach. I asked the photographer on the other bank how deep the water was. “About mid-thighs for the guys,” he said, which would mean about the waist for me.
“I forgot my bikini,” I said to no one in particular. 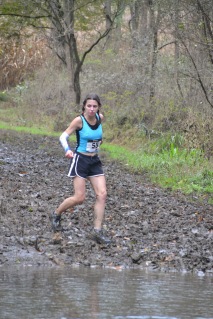 (“Wait, where is the bridge?” Photo by Derek Schultz) 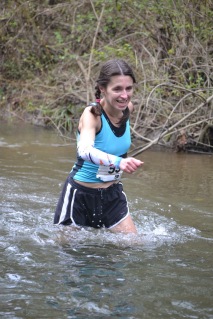 (“I forgot my bikini!” Photo by Derek Schultz)