Non-runners often ask me about the runner’s high: whether I’ve experienced it and how it feels.

To them, it seems to be a sort of mystery orgasm reserved to sweaty sneaker-wearing fanatics who find pleasure where they, the non-runners, see pain and boredom.
I’ve experienced the runner’s high may times and it felt a bit different each time. It always comes after running for a fairly long time, when the muscles are warmed up, the body sets into a cruise-control mode, the heart beat stabilizes and the endorphins kick in. I’ve had short and intense highs — a brief state of euphoria that makes me smile, do a little dance or shout the lyrics of whatever song is on my iPod — and longer ones — when I reach a fantasy land of daydreams and “wake up” three miles later. But don’t get me wrong, I tell the non-runners: it doesn’t happen every time I run. Far from it. There’s no runner’s high at the start of an early morning run when it’s pouring rain and freezing outside.
Lately, I’ve had none of that runner’s nirvana, for a simple reason. I haven’t been able to run in two weeks. To a non-runner, it’s a non-event. To a runner, it’s a disaster. To a runner training for a marathon coming up in less than 10 weeks, like me, it’s a nuclear catastrophe.
It started mid-January, about two weeks after the official start of my marathon training, with pain in my left calf and shin. I attributed it to possible early signs of shin splint or the fact that I had been running faster on the treadmill, during my weekday tempo runs and speedwork session. Or perhaps I needed new shoes. The key rule of marathon training is to gradually increase speed and mileage, ideally not at the same time, to avoid injury. That’s what I thought I was doing. I had been running 20-mile hilly runs “for fun” (as my husband puts it) during the previous months, and on some weeks I averaged close to 50 miles. The whole point of my long runs at the end of the year was to make the transition to the actual marathon plan smoother. I decided to ignore the pain and continue running. The shin pain went away but the tightness in the calf worsened with every run, forcing me to run slower.

On Jan. 16, I skipped a 10-mile race, knowing I wouldn’t be able to run fast, but would still try to, possibly injuring myself. Skipping the race was the reasonable thing to do, I thought. Somehow I also thought it was reasonable to run about 18 hilly miles that day — 15 miles by myself and 3 with my dog. This tale is familiar to runners: it’s called denial. How bad could tightness in the calf be? It’s just a muscle, it just needs to get used to the training, it will get better if I run through it, I thought.

I iced my calf, I got massages and I stretched, to no avail. The last straw was a hilly 15 miler through pain on Jan. 23. It took me 6 minutes longer than usual. I couldn’t walk for two days afterwards.

Rather than writing this entry, I had planned a review of my birthday present: a treadmill. But it’s been sitting in the basement, unused, while I kept my stationary bike busy: that’s where I do my speedwork now.

(My corner of the basement: On the left a treadmill sits unused. On the right, a bike gets overused.)
My other consolation prize is the elliptical machine at the gym. They have different types at the YMCA, and my favorite model is one without handles that mimics the best the movements of running. I can “run” close to 9 miles in an hour on that machine, while on others I can’t even master 7 miles.
Yesterday, after 40 minutes or so of an uninspired fake run, during which I was trying to push my heart beat to levels close to an actual run, it happened. I experienced a brief bliss that made me forget about the badly-lit gym, the backs of treadmill runners and the hospital parking across the street. I was listening to Built to Spill’s “Fly Around My Pretty Little Miss” from the Ancient Melodies of the Future album. It was a short moment of sheer elation that made me forget that I can’t run: the elliptical high.
I’m going back tonight. 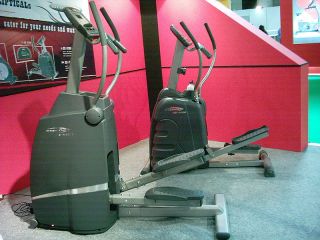