My parents beat Yannick Noah, 48, the 1983 winner of the French Open, at the New York City Marathon this year. Too bad the word awesome is overused because it applies to them. My parents are in their early 60s. They inspire awe. 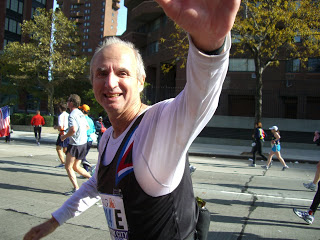 “I’m happy with my time,” my father, 60, said after the Nov. 2 race, his 16th marathon. He was wearing a navy blue, hooded sweat-shirt with “France” written on it. He had a big smile on his face. My father finished in 3h37m45s, his best time since 2004, ranking 45th out of 910 men aged 60 to 64. The previous afternoon, nursing a beer in an Irish pub near Penn Station, my father said he would be disappointed if he ran in more than 3h50 and happy if he could go under 3h45.
“It’s not bad, I’m just a bit disappointed because I walked near the end.”
That’s my mother, 61, standing next to her husband after the race, wearing the same shirt. She completed her 15th marathon in 3h53m32s, 8th of the 216 women in her category, and shaved 5 minutes off her time at last year’s New York marathon. “I can still scrape off few minutes while being one year older!” she said. At the pub the previous day, she said she would “explode with joy” if she could finish in 3h50. 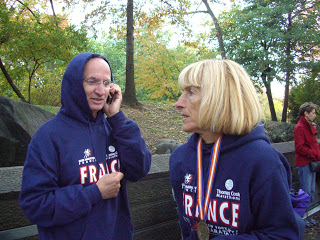 My parents are unaware they are awesome, not just because of their athletic feat, but because of their modesty and the apparent simplicity with which they tackle such a challenge as a marathon. They don’t brag. They don’t complain. They don’t find excuses when their time is disappointing.
Their secret for doing so well this year, they told me, lay in the preparation. For the first time, they chose a training plan — a strenuous program for a 3h30 race that included speed work on various distances — and strictly followed it. They also worked on their core. Another change from previous marathons was that they drank water and Gatorade more regularly and took energy gels during the race.
In my father’s case, it helped that he was training during the week with a friend who runs faster than him. In my mother’s case, it helped that she retired and had time to train. The plan helped them recover faster too. By Nov. 5, any minor sore muscles they’d had were gone. I suspect most of the soreness was due to the flight back home on Nov. 3, rather than the race.
My father said he tried to keep his pace in the second half. In fact, he ran a bit faster from 35k to 40k (27m33s) than from 30k to 35k (27m37s).
“Trying to keep the same pace, avoiding slowing down — that’s the only way to finish,” he said. “It’s very tempting to say `I’ll just slow down a little bit now and pick up later when I feel better,’ but it doesn’t work. You never pick up.”
My parents work out all year, not just to prepare their marathons. In the winter, they run and take bi-weekly gym classes — which include abs, stretching and leg work. They bicycle up mountain passes during the summer. Every year in July, they take a two-week vacation bicycling all day from a hotel to another with a large group of friends. That explains why, when they begin their marathon training, they start off from a good base. 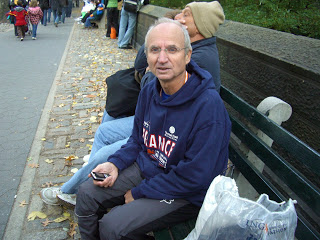 Last Sunday after the race, my father was sitting on a bench on Central Park West, busily texting his running partner, and my mother was looking for something in her bag, when the 6-feet-3 (1m93) Yannick Noah walked by. The former champion, who is now a popular pop singer in our country, had just finished his race in 4h00m33s. By the time I’d told my parents to look up, Noah was already several meters away. “Yannick! Yannick!,” my mother screamed. The former tennis player didn’t look back. If he had, he would have seen two champions who ran faster than he did.